Since April 2021, the Territorial Directorate of the OFII in Nice has taken the initiative of organising monthly exchanges with integration stakeholders and partners in the Alpes-Maritimes, by video conference.

The first video conference of 2022 brought together more than 60 integration actors and partners such as EachOne, CIDFF PACA and SLV association.

The aim of these video conference exchanges is to create an active and interactive integration support network for the signatories of the Republican Integration Contract.

These actors come from public, associative, private structures, accommodation providers, employers at national and of course departmental level, such as the communal centres for social action, the departmental solidarity house, etc.

Each of these actors, partners, has specific mechanisms dedicated to refugees, newly arrived, or accompanies in the field foreigners settling permanently in France.

It was important for the Nice Directorate to bring them together so that they could get to know each other and exchange ideas in order to make the orientation of newly arrived towards integration programmes more effective and appropriate.

Thus, during the half-day reception and integration session at the territorial directorate of the OFII in Nice, the auditors presented to newcomers, in small groups, the concrete actions of its partners offering short or medium-term support opportunities.

They broadcast, for example, videos explaining how to register with Pôle Emploi and how to validate acquired experience (VAE), or training opportunities followed by integration into employment (IFETH Formation-Belambra Clubs)

At the end of their republican integration contract or if their level of French is sufficiently high, some of them are directed towards structures that quickly meet their needs: training, employment, access to rights.
The identification of profiles facilitates referrals to support and integration actions. 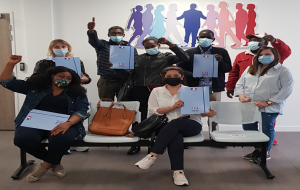 Thus, four newcomers obtained the certificate of aptitude for safe driving of machinery (CACES) and an order picker title by quickly entering free training at AFTRAL.

Four other signatories of the Republican Integration Contract benefited from the Cuisine Mode d’Emploi training in Nice, and obtained the professional title after eleven weeks of intensive training. They recently signed a permanent contract, less than three months after obtaining their professional designation.

The Nice territorial directorate can direct signatories of the Republican Integration Contract to service providers who have a detailed knowledge of the jobs in short supply in the department.

Promoting accelerated integration paths for people who have signed the Republican Integration Contract is one of the ambitions of the Nice Territorial Directorate. Through its video conferences and the tools it has set up to monitor the pathways, it centralises opportunities for integration support and helps to guide those who have signed the Republican Integration Contract by organising numerous collective information sessions at the territorial office.

The directorate also uses the twitter account @OFII_Nice, in order to announce training and employment actions as quickly and widely as possible.

To date, 400 signatories of the Republican Integration Contract have been placed on an integration support scheme.

Author of the photos : Ms Dominique MENSAH, Deputy Director of the OFII Territorial Directorate in Nice.