The sun was needed; it came up to the mark. Teams were needed, 25 OFII language trainees were present, all signatories of the Republican Integration Contract (RIC). All the ingredients were combined for the sports event of the integration week.

After an hour of workshops to understand the basic rules of rugby and train with the oval ball, four teams played touch rugby in a short but engaging knockout tournament.

The atmosphere and camaraderie were great. One winning value: integration. Only one winning team of the tournament, the one in the white shirt; France. Some would say that it is a sign for the 2023 Rugby World Cup in France! 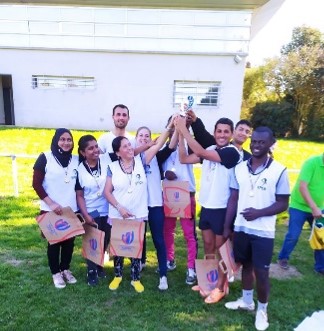 Prizes were distributed and the medal, obviously, was for the winners.

Vocations may have been born, but everyone will have remembered, in their integration process, a day like no other.

This event was held in the presence of Mrs. Stéphanie Gherardi, deputy of the city policy pole at the prefecture, Mrs. Louge and Mr. Rouquier from the Rugby no limit association, Mr. Barrère and Mr. Dassin from the OFII of Toulouse as well as four members of the Organising Committee of 2023 Rugby World Cup in France.

To find out all about the events organised throughout the week throughout France, consult the interactive map proposed by the Minister of the Interior: Integration week, from 11 to 15 October 2021

And for more information about the Republican Integration Contract, see our dedicated section: